In April, many West End residents attended an Open House hosted by Ankenman Marchand Architects, who presented a proposal to develop 1150 (now referred to as 1158) Comox Street on behalf of the property owners, Vandwell Homes. This is one of the eight privately owned properties on the Mole Hill block not belonging to the Mole Hill Community Housing Society, who operate twenty-eight of the properties.

They proposed moving the house to the front of the property and constructing an apartment building at the back. However, the development application was rejected by the City. This was encouraging news as there were numerous problems with the proposal – parking, heritage preservation, and density & siting concerns (the physically dominating aspect of the proposed infill building).

However, a new development proposal has been submitted, with a similar design. Once again the proposal is to move the existing house to the front of the property. A large infill construction is to be added to the house and a modern apartment building backs onto the Mole Hill Laneway.

Under the site’s RM-5B zoning, the application is “conditional” so it may be permitted; however, it requires the decision of the Director of Planning.

Details of the design with plans, 3D renderings etc are available online at the Urban Planning section of the City of Vancouver’s website in a list of development applications: http://former.vancouver.ca/commsvcs/developmentservices/devapps/1158comox/index.htm

1150 Comox Street is not designated a heritage building yet the architects are apparently seeking a “Heritage Revitalization Agreement” with the City. Such an agreement offers compensations to the developer in exchange for protecting the heritage asset. Normally the compensations takes the form of variances in the use, density and siting regulations.

Like the previous proposal, and another application this year for 1180 Comox Street, the scale and design of the infill building seriously compromises the integrity of the Mole Hill block from a heritage perspective while the proposed relocation of the original house negatively alters the famous Mole Hill streetscape on Comox Street.
Among the other concerns: the building will dominate the Mole Hill laneway, wrecking it’s expansive interior and imposing upon the neighbouring historical properties; the construction period will disrupt the community and threaten the adjacent community gardens; contrary to the established nature of the Mole Hill Community the completed units will be 100% privately owned with no affordable housing component or rental options.

There are numerous questionable items in the plans that were posted online. Most obvious is that the owners of the property incorporate part of the property belonging to Mole Hill Community Housing Society into their design – notably encroaching upon 1154 Comox. This would of course not be possible. There are other such items regarding the placement of trees, fences, neighbouring structures etc. that take a creative approach to the actual layout of the properties.

There is further concern regarding the manner in which this application has been made and the absence of public consultation.

There are over 200 adult tenants who rent from Mole Hill Community Housing Society. Additionally there are over 100 adult tenants in the Strathmore Lodge or who occupy rental suites in the four or five other privately owned properties on the block. Several hundred more reside in rental apartments on Pendrell Street. However, of the several hundred residents of this block, less than 10 will have received the postcard that notified of this application because they are not property tax payers. There is no reason why the developer should not be required to alert all tenants in the neighbourhood, as is easily done by other organisations such as film companies or even the City of Vancouver (recent notices re. parking consultation were ubiquitous).

The City of Vancouver website states that “comments should be received on, or before November 27, 2015, to be considered in the staff review.” Yet a public notice was not posted at the property until December 1st 2015. A city staff member informed us that the comment period had been extended to December 16th but at the time of writing that is not reflected in any public notices or the City’s website.

The City of Vancouver website lists this as 1158 Comox, which would mean the house addresses on Comox Street will go 1146>1158>1154>1160. Any person visiting Comox Street to view the property during the advertised staff review period would be unable to identify it.

This bizarre non-consecutive re-numbering of the address, together with the absence of notice and the confusion surrounding deadlines for comments seemed designed to obfuscate information about the development. It is a very discouraging approach to development planning, particularly in such a sensitive heritage area as Mole Hill. 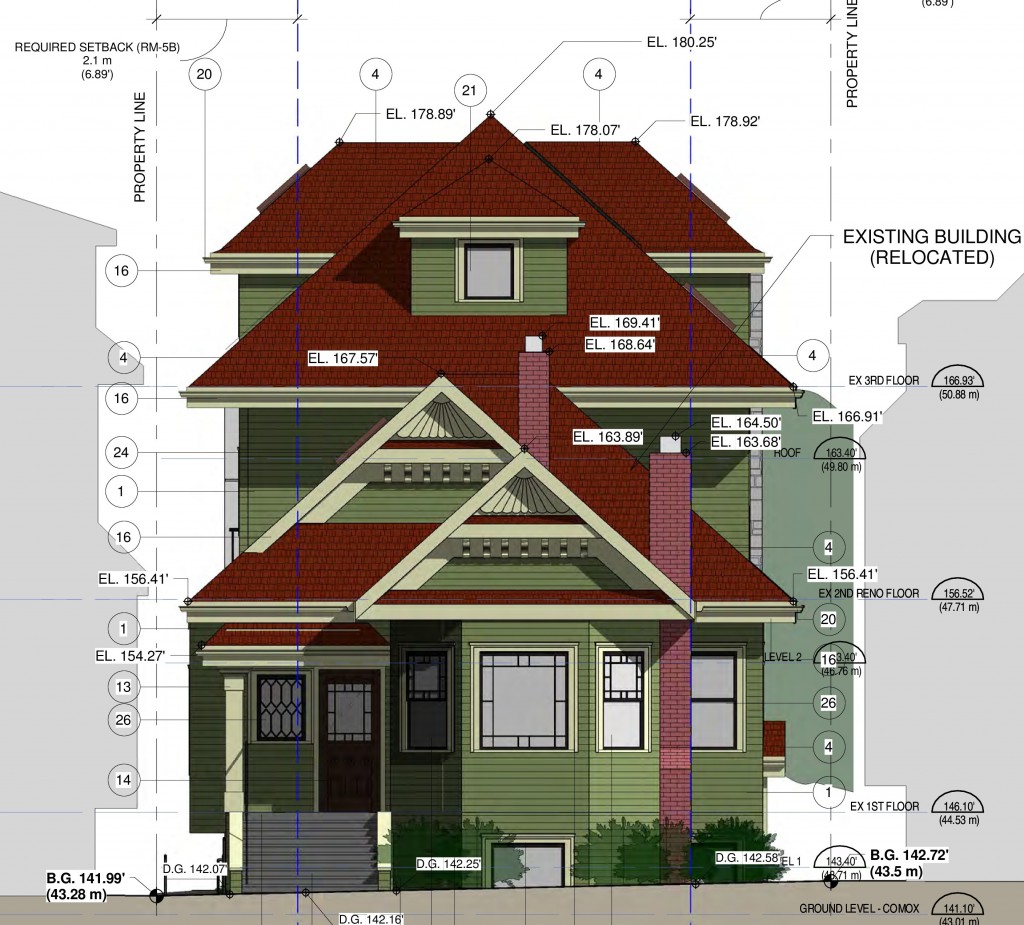 The city is accepting written comments (letter or e-mail) on this development application. Comments should be received on, or before Wednesday December 16, 2015, to be considered in the staff review of the project.

The contact to submit your views is John Freeman, Project Facilitator, john.freeman@vancouver.ca , 604-871-6076.

If you wish to view the printed plans, or to discuss this further, please contact Quentin Wright, Executive Director of Mole Hill Community Housing Society at: 604-681-2096, qwright@molehillhousing.ca.

We will keep the community informed on any further developments.