The concept of Mole Hill as an important heritage landscape has been abandoned as the City of Vancouver approves modern redevelopments and the demolition of a house at 1180 Comox Street.

Mole Hill is Vancouver’s ONLY intact heritage block. The houses date from 1886, the year the City of Vancouver was first incorporated and includes many of the city’s oldest houses. There are more listed heritage buildings on the Mole Hill block than any other city block.

City staff and council have repeatedly reassured the community that Mole Hill is not threatened. Yet in April 2016 the City of Vancouver took the unprecedented step of approving the demolition of the house at 1180 Comox Street. The property will be redeveloped as a 6 unit apartment building in a modern style. 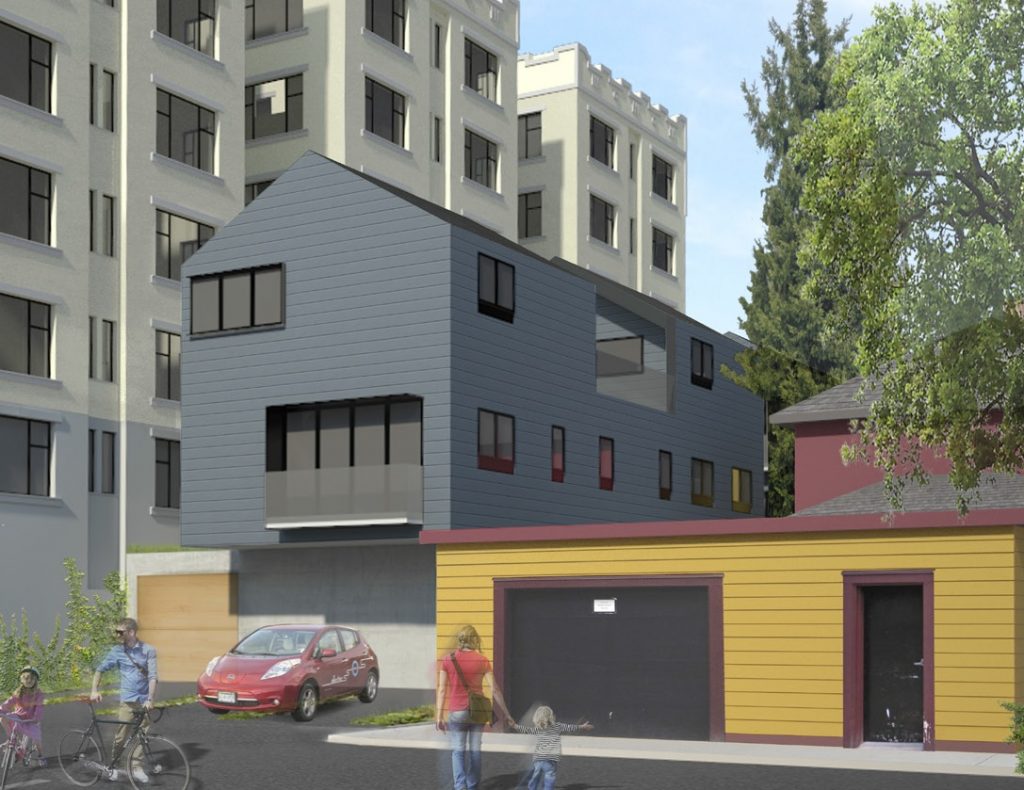 And in February 2016, the Heritage Commission moved to support a development application for 1150 Comox Street for a domineering infill apartment building which is brashly modern in design. The proposal’s imposing modern design is located in the middle of the block, seriously compromising Mole Hill’s innovative and award-winning greenway and ruining the concept of the lane as an expansive heritage landscape.

The Heritage Commission approved the plans on February 22nd 2016 but they were not made available to the public until being uploaded to the City of Vancouver website on May 6th 2016.

The City of Vancouver approved the West End Community Plan in 2013. This plan claims to seek to preserve heritage resources, praises Mole Hill and describes the Mole Hill laneway as “a cherished community space”. However, the Plan’s zoning for Mole Hill is the same as any other block in the West End and permits large-scale infill buildings and no additional protection for the heritage landscape or the traffic-calmed greenway.

Mole Hill has received numerous city, provincial and national design awards. The city-owned properties were restored following a decade of community activism that saved it from destruction. It continually receives accolades from the public for its forward-thinking embodiments of heritage preservation, green building design and sustainable community development.

Dozens of community members, including Spencer Chandra Herbert MLA, and architect Sean McEwan (who oversaw the restorations at Mole Hill) have written to the city in recent months requesting stronger measures to preserve the heritage character of this block.

Development of these properties seems inevitable, but community advocates strongly feel that the city should approve designs that do not conflict with the heritage landscape and respect the one-storey massing adjacent to the greenway.

A public meeting to discuss the future of Mole Hill is scheduled.